Football is the UK’s national sport which means there’s a football stadium in almost every town and city across the country. London is home to some of the biggest and best football clubs in the world which are recognised all around the globe. Therefore, London football stadiums are also some of the biggest and best. They range from historic time capsules that capture where the sport has come from, right thought to billion-pound projects leading the way in sports ground innovation.

If you’re a Premier League fan or a tourist visiting the nation’s capital, the five London football stadiums listed below are worth a visit. The best way to experience them would be to get yourself a ticket to a match and see them full of people. The noise of passionate football fans brings the crafted lumps of concrete and steel to life. 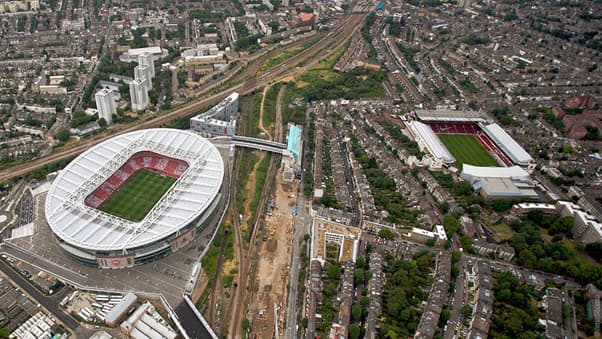 The Emirates is home to Arsenal Football Club, who moved to the new stadium from their home of 93 years, Highbury Stadium, in 2006. The Emirates is a stone’s throw away from the old ground, only a half-mile walk and even less as the crow flies. The reason for the move was financial as the increased capacity allowed for more ticket sales. It was a success because fans flocked to the stadium and it was sold out for every home game of the opening season.

As a fan, spectator or tourist the Emirates is one of the finest football stadiums with spectacular engineering and finishing touches. The mixture of glass and steel used throughout the construction results in the stadium sparkling in the sunlight and glowing at night. The roof is shaped like a bowl with striking white supporting steel frames that can be seen from inside the stadium. 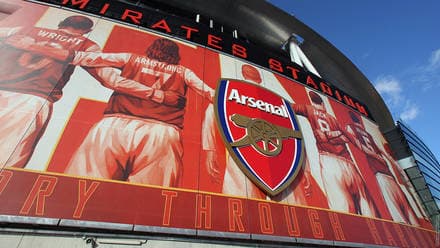 In 2009 after listening to the fans, the club began ‘Arsenalising’ the stadium to make it feel like some of the history of the club could be felt as you walked around The Emirates. A pattern of white seats was installed in the shape of the trademark cannon. There is also a mural that depicts every Arsenal player to have put on a club shirt which can be found at the south end of the stadium. Finally, you will see the backs of 32 Arsenal legends linking arms surrounding the stadium. 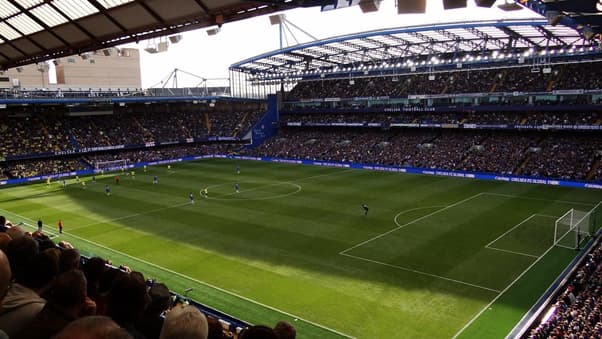 Now we’re moving from the glistening new Emirates Stadium to the historic Stamford Bridge which first opened in 1877. So, this London football stadium has been around longer than the light bulb! It started as the home to the London Athletics Club until the Smears brothers bought it and founded Chelsea Football Club to rival close-by Fulham FC. It had an official capacity of 100,000 in the early days with two 5000 seater stands on each side of the pitch. The stadium went through various construction phases and a series of modernisation projects during the ’90s. Today it has a capacity of 41,837 making it the 5th largest stadium in London.

The stadium has four stands (The Mathew Harding Stand, East Stand, Shed End and West Stand). Stamford Bridge also has a hotel, a museum, and a merchandise megastore. Chelsea has a £1 billion redevelopment project in the pipeline that would modernise the stadium further and increase the capacity from 40 to 60,000. However, they are having problems with getting planning permission. As it stands the stadium looks like a classic English Premier League stadium with four stands surrounding the pitch and a combination of corrugated and pipe steel roofs. A visit to this stadium is more for the history than the aesthetics but it’s one that should still be on your list. 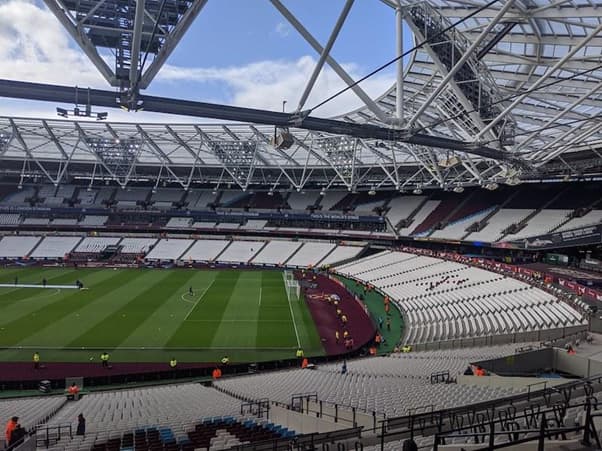 We go from old to new this time to The London Stadium which is home to West Ham United or ‘The Hammers’. It’s the 5th stadium that the club has called their home since they formed as Thames Ironworks FC in 1895. The Hammer’s true home stadium will always be Boleyn Ground in Upton Park which was the football club’s home ground for over a century. However, since moving to The London Stadium, Boleyn Ground has been demolished to make room for a housing development. So, West Ham fans will have to get used to their new home.

The London Stadium was originally built for the 2012 London Olympics. Construction began in 2008 and finished in 2011 before opening on 6th May 2012. It cost £486 million to get it ready for the Olympics and a further £274 million in renovations post-Olympics. There were several world records set in this stadium including David Rudisha’s 800m world record, two relay world records and Usain Bolt’s Olympic record which was the second-fastest 100m ever to be run. 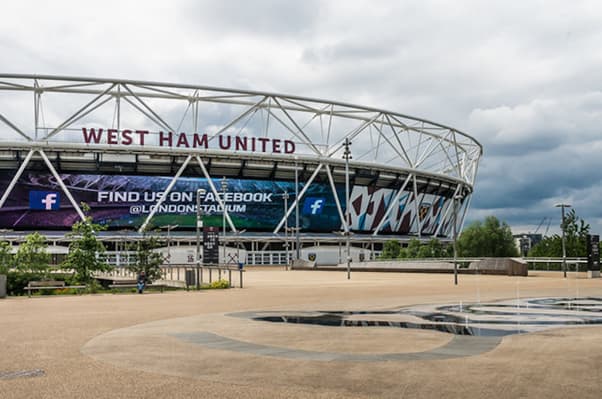 Once the Olympics was over, the Stadium needed some new tenants. It made sense for West Ham (an East London football club) to move in and make it their own. When set up for football, the stadium has a maximum capacity of 60,000 which goes up to 80,000 when it’s set up for a music concert. The best way to see The London Stadium is on a match day. If you could catch The Hammers play against one of their Premier League London rivals like Tottenham or Chelsea, you’ll experience an atmosphere like no other. If you prefer to get behind the scenes there are also a bunch of guided tours that you can do, some of which end with a Q&A with West Ham legends. 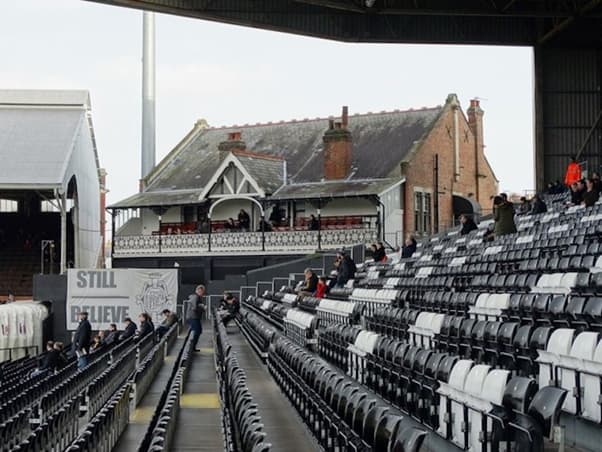 You might be able to spot a theme here but we’re taking a step back from the brand new London Stadium into a piece of football history. Fulham FC has been playing at Craven Cottage since their first match in 1896. The 10th of October this year will be the club’s 125th anniversary at Craven Cottage. So, this stadium has seen a lot of matches including several matches during the 1948 London Olympics which was the first Olympics held after World War II. 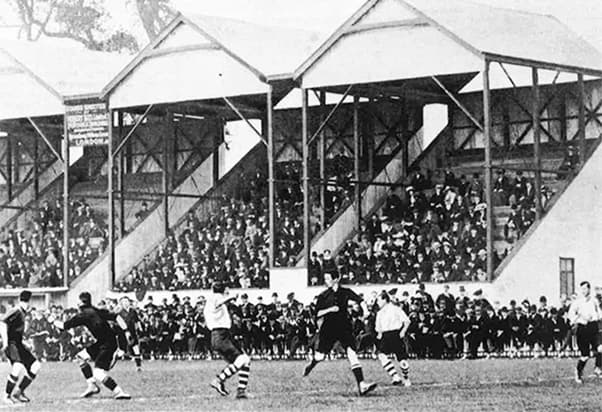 Craven Cottage is named after the royal hunting lodge built by Lord Craven in 1780 that used to stand where the centre circle is right now. The ground does have a picturesque cottage within the stadium which was part of the original build that cost £15,000. The ground was originally made up of terracing built out of materials salvaged from Shephard’s Bush underground station. The stadium has been through many renovations since then, with the latest riverside development set to provide more than just football and aims to attract visitors from all over London. There will even be a way for fans to arrive at the stadium by boat. Talk about arriving in style to a game! 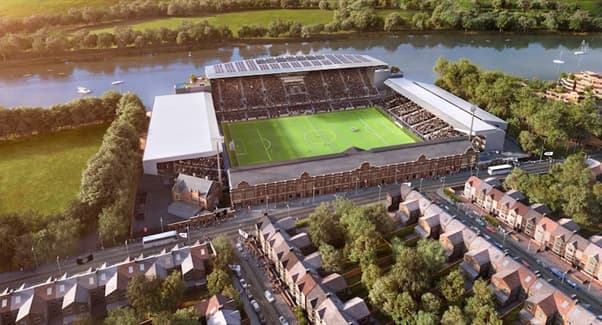 So, if you’re a tourist wanting to visit the best London football stadiums, Craven Cottage has to be on the list. You will get the perfect blend of historical significance and a world-class modern attraction with all the nice-to-haves. 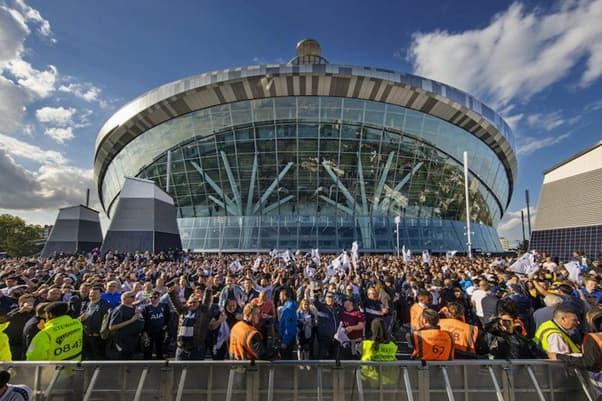 Finally, we’re heading to London’s newest football stadium development, the Tottenham Hotspur Stadium which is home to Tottenham Hotspur Football Club. Spurs use to play at White Hart Lane. The team played 2,533 games across 118 years before moving into their swanky new home. The new stadium costs more than £1.2 billion to build and took over a decade to complete from the initial idea to the final build. It will be used for Premier League matches, concerts and NFL games when the league comes to London. 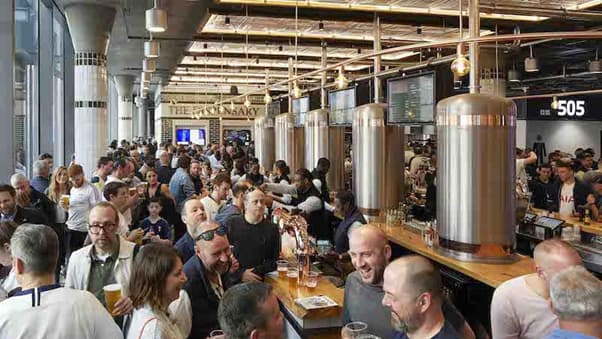 It’s been designed to create the best live experience possible with uninterrupted sightlines, close proximity to the pitch and steep stands that amplify the noise from the fans. Former Spurs manager Jose Mourinho stated:

“I think you are too humble when you say, ‘beautiful stadium’, too humble. You have to say the best stadium in the world. That’s the reality.”

From the stands to food courts and from the hospitality suites to the in-ground bars, everything is impressive. It’s a one of a kind stadium that is pushing the boundaries of what’s possible within the stadium construction industry. The first time you experience it, you’ll be in awe and you might even get goosebumps. It’s so good that I suspect Spurs will be gaining a few more fans this year just so they can call it their home ground!

As you can see there are a lot of London football stadiums with an impressive history and stunning construction, and we haven’t even talked about Wembley in this list! If you have the time, try and get yourself a match ticket to the stadium you most want to visit. This way, you can see it how it was intended to be seen. If you’re a football fanatic, then booking on to the guided tours that all of these stadiums offer will be a great way to get behind the scenes and see parts of the stadium that you’d never see on game day.

How to Make A Video with Music and Captions

On 15th October 2021, depressing news circulated the media, demonstrating the death of British...

The UK Government Demands to Bypass Facebook Encryption: Huge Payments to the Firms

The UK Pacific Trade Group Talks, Aiming for the Conclusion

British Ambassador left Afghanistan on Saturday, Traveled to the UK

Know Everything about Revision Circumcision Surgery for Adults

Christmas Countdown 2021 _ Celebrate Your Christmas in the UK