UK Health Secretary Matt Hancock announced on Monday that “The number of corona cases is increasingly soared in the British Capital. London is again going to experience a very strict lockdown before New Year”.

Restrictions of tier 3 lockdown will be implemented in the greatest British capital London, Essex, and many parts of Hertfordshire due to the rapid increase in corona cases. London has registered a total of 24000 confirmed corona cases from 5 to 11 December.

Tier 3 is the strictest coronavirus lockdown that London will experience from 00:01 GMT Wednesday. Pubs and restaurants will stay close until the next order and strict restrictions are also executed on house mixings.

UK Health secretary has made it official that from Wednesday more than 34 million people will stay under strict tier 3 corona lockdown. Mobilizing of people is also banned for a week within the restricted areas until the next order.

Hancock has made this official that London will be moved from its “High Alert” tire two to “Very High Alert” tier three lockdown. Tier three restrictions will also be implemented on many south & west areas of Essex and the Southern side of Hertfordshire.

In a meeting, Health Secretary seems very disappointed and said that “in the last three weeks, England has experienced a sharp exponential increase in the number of corona patients.” Due to these surging cases in London, Essex, and Hertfordshire, British Government has decided to take drastic actions in the affected areas and stop flights and traveling from tire one/two areas to tire three areas.”

On Monday morning Hancock said that “this is all new variant and government does not know the extent of lockdown. But no matter, what happened, it is time to implant swift and strict actions otherwise the UK will experience. Unfortunately, tier three is the only way to control this deadly disease until the government rolls out the vaccine.”

He also said that “the doubling of corona cases is happening in every seven days and it is not only among school children. People over the 60 are catching this deadly disease rapidly and it is the only thing we can do to avoid it.”

Further, he added in his speech that “the hospitals in London, Kent, and Essex are facing pressure and soon get out of space due to overwhelming number of patients.” Hancock mentioned that “taking strict actions is not easy but it is effective and the British empire from serious damages.” In one meeting with reporters, he also mentioned that “it is going to be quite difficult but it is necessary and we must not hesitate for entering tier-three lockdown.”

Regions that join London in tier three lockdown include much of central & northern areas of England such as southeast Kent and Bristol. People of the UK are allowed to form a Christmas bubble within 3 households from December 23 to 27. Households will stay only in one bubble and they are not allowed to switch places.

Hancock said that “it would be more awful and tragic to lose more lives because of deadly virus at this time when the vaccine is ready and rolling out in different parts of the country. We have already phase a terminal lockdown in April and we know very well that taking action is much better than losing more people. Tier three is the only solution to avoid strictest restrictions not only in specific parts of the country but also in the whole of England.”

Mayor of London Sadiq Khan has shown his disappointment regarding this decision and made a tweet that “it is again going to be a bad decision for business activities because it has already suffered a lot in previous lockdowns.”

Chris Witty, the UK’s Chief Medical Minister has said on Monday that “experts of the genetics of viruses have said that the increase in the mutation of the virus was totally unexpected and it was not seen before this.” Later on, Monday Hancock made a tweet about Tier three that “it is a stressful situation that there is nothing to guess and suggest about the seriousness of variant and deadly virus. According to the latest clinical advice is that it is unlikely known that mutation of the virus will respond to the corona or not.”

Witty has mentioned later on Joint News Conference that “this new variant of the virus is much more dangerous than the previous one and corona tests are proven operative against the variant.” Later British Health Minister has mentioned that “in other countries, this variant is already identified a few months ago. As an expert analysis on Corona was continued, the UK already notified the World Health Organization about the amendment of the new variant.”

The viral Immunologists at Birmingham University Doctor Zania Stamataki said that “the new variant strains of coronavirus are not unexpected.” She also said that “this virus does not mutate as fast as influenza but it is necessary to keep it under strict surveillance.”

The Neurology professor Tom Solomon at the University of Liverpool has also added in mutation report that “just because some changes in the genetics of the virus, it does not mean the vaccine will not be effective as we thought or it is hard to tackle this battle.” 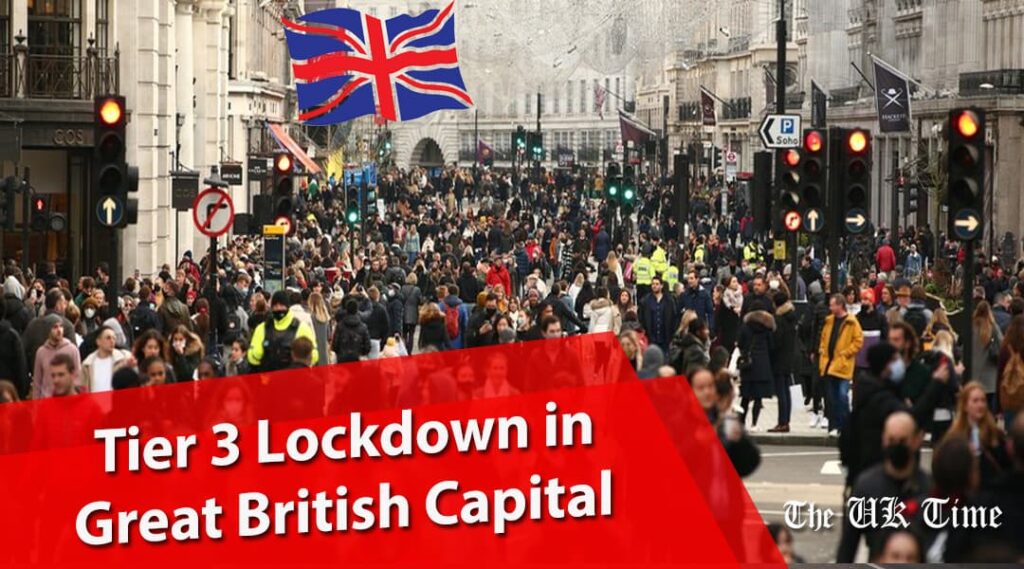 Rules of Lockdown in England

From Wednesday 12:00 am, the following areas of England will experience strict tier 3 lockdown

Some Parts of Essex

Don’t worry; there are some exceptions for labor, childcare, and support bubbles in each tier of the lockdown.

Ground Rules For Deciding The Tiers

Under the new tiring system of lockdown, it is expected that almost 55 million people from all around the country will face lockdown and are prohibited from mixing with other household and private venues. The ground rules for each tier of lockdown is based on

Any further details about tier-three lockdown in London will be uploaded on The UK Time.